Howard Zinn interviewed by Robert Birnbau. IdentityTheory.com . January 10, 2001.
"I talk to audiences in Oklahoma and Texas and here and there and mostly to audiences of people who don't really know my work. I certainly don't expect them to be sympathetic to my ideas. When I express my ideas — and they are radical ideas — except that I don't start off by saying, 'I'm now going to tell you radical ideas.' Or, 'I'm now going to expound ideas of socialism or attack capitalism. Or, 'This is going to be a hate imperialism talk.' None of that. People respond to common sense ideas about foreign policy and domestic policy. It encourages me about the potential in this country, despite who is running it."
END_OF_DOCUMENT_TOKEN_TO_BE_REPLACED 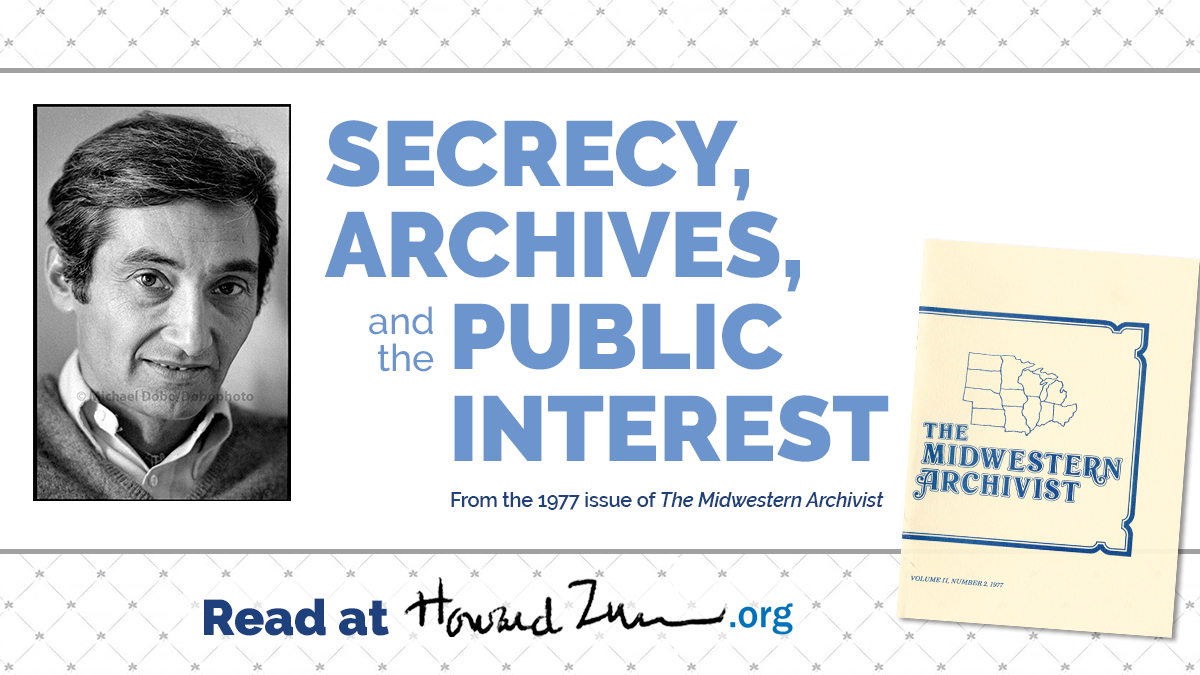 Secrecy, Archives, and the Public Interest

By Howard Zinn. Midwest Archives Conference/Archival Issues. July 1977.
This paper was presented at "The Archivist and the New Left" panel of the Society of American Archivists' (SAA) annual conference held in Washington, D.C. in which he urged archivists “to take the trouble to compile a whole new world of documentary material, about the lives, desires, needs, of ordinary people.”
END_OF_DOCUMENT_TOKEN_TO_BE_REPLACED Talk at the History and Consequences of Anti-Communism Conference (1988)

This clip is from Howard Zinn’s opening talk at the 1988 international Conference “The History and Consequences of Anti-Communism” held in November 1988 at Harvard University. This talk became the basis for two articles, as Zinn notes in the introduction to “Where to Look for a Communist” in The Zinn Reader (p.…

By Howard Zinn. Excerpt from You Can’t Be Neutral on a Moving Train
December 30 is the anniversary of Daniel Ellsberg and Anthony Russo being indicted in 1971 for releasing the Pentagon Papers. The papers were part of a 7,000-page, top secret history of the U.S. political and military involvement in the Vietnam War from 1945-71. In other words, their “crime” was to make the American public aware of the history of the war. Howard Zinn recounts the lead-up to Ellsberg and Russo's indictment.
END_OF_DOCUMENT_TOKEN_TO_BE_REPLACED 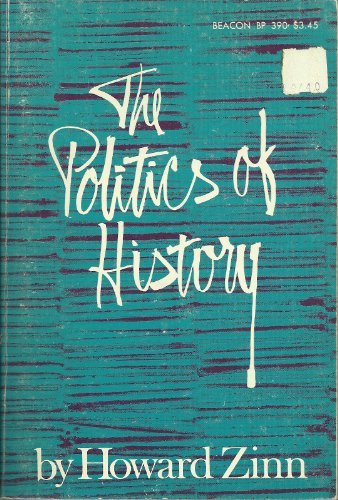 The Politics of History The State of the Union: Notes on an Obama Administration

By Howard Zinn. Book - Speech. Back Bay Books. 2009.
Based on a talk delivered in the weeks following the historic election of Barack Obama, The State of the Union is a sobering look at whether the new president could turn the euphoria of a nation toward enacting the change his supporters had hoped for.
END_OF_DOCUMENT_TOKEN_TO_BE_REPLACED

Howard Zinn interviewed by Al Jazeera. September 13, 2008.
Q: Is there any hope the US will change its approach to the rest of the world?
"If there is any hope, the hope lies in the American people. [It] lies in American people becoming resentful enough and indignant enough over what has happened to their country, over the loss of dignity in the world, over the starving of human resources in the United States, the starving of education and health, the takeover of the political mechanism by corporate power and the result this has on the everyday lives of the American people."
END_OF_DOCUMENT_TOKEN_TO_BE_REPLACED

By Howard Zinn. Article. Boston Globe and Common Dreams. September 2, 2006.
There is something important to be learned from the recent experience of the United States and Israel in the Middle East: that massive military attacks, inevitably indiscriminate, are not only morally reprehensible, but useless in achieving the stated aims of those who carry them out.
END_OF_DOCUMENT_TOKEN_TO_BE_REPLACED

Howard Zinn interviewed by Paul Glavin and Chuck Morse. Perspectives on Anarchist Theory. Spring 2003.
Howard Zinn has been a pivotal figure in the American Left for decades. As an activist and writer, he has influenced generations of leftists and helped encourage a strong commitment to direct democracy, anti-racism, and grassroots action. We asked Zinn about the current changes in the political environment, his theoretical commitments, and some of the challenges faced by radical intellectuals.
END_OF_DOCUMENT_TOKEN_TO_BE_REPLACED

By Howard Zinn. Article. TomDispatch.com. April 1, 2008.
With an occupying army waging war in Iraq and Afghanistan, with military bases and corporate bullying in every part of the world, there is hardly a question any more of the existence of an American Empire. Indeed, the once fervent denials have turned into a boastful, unashamed embrace of the idea.
END_OF_DOCUMENT_TOKEN_TO_BE_REPLACED
« Previous 1 2 3 4 5 6 7 8 Next »