To inspire people to read, write, and make history
This digital collection is a searchable bibliography of materials by and about Howard Zinn, including books, articles, letters, films, audio, and photos from publishers, broadcasters, organizations, archives, libraries, and personal holdings. When possible, we have published the content or an excerpt for research and educational purposes. In most cases, we link out to where you can read, watch, or listen at the respective publisher or archive.

Do you know of something that should be listed? Let us know using our contact form. 'Don’t Depend On the Authorities, the People in Power to Solve Problems'
Talk by Howard Zinn. Democracy Now! February 25, 2003.
A speech Howard Zinn gave at the New School University. He talks about bombs, terrorism, the anti-war movement and the Bush administration’s impending war on Iraq.

'Election Day Will Not Be Enough': An Interview with Howard Zinn
Howard Zinn interviewed by Jessica Lee and John Tarleton. Indypendent. Nov. 14, 2008.
"Significant changes occur when social movements reach a critical point of power capable of moving cautious politicians beyond their tendency to keep things as they are — or when these movements, by direct action, bypass the political system and bring about change by acting directly on the obstacles to change." 'History as a Political Act'
Howard Zinn interviewed by Raymond Lotta. Revolutionary Worker. December 20, 1998.
"Beneath the surface of youthful 'ambition'—'need to graduate,'' 'need to make a career'—beneath that surface, I believe there's always among young people a hunger to do something worthwhile and important. And if you present young people something that is happening, that touches them...I find that they respond." 'I Wish Obama Would Listen to MLK'
Howard Zinn interviewed by Amy Goodman. Democracy Now! May 13, 2009.
Legendary historian Howard Zinn joins us to talk about war, torture and the teaching of history. Zinn says had Obama heeded the lessons of Dr. Martin Luther King, Jr., he wouldn’t be escalating U.S. attacks abroad and increasing the size of the U.S. military budget. 'Inspire Please...'
By Howard Zinn. ZCommunications. July 16, 1999. The Progressive, September 1999, as "Words in Encouragement."
"For those not in the know, let me explain that we who write for the progressive-radical movement have our specialties. Some specialize in writing depressing stuff. Others write humorous pieces. Some concentrate on trashing other Left writers. It seems that there was an opening this month for someone to inspire, and I was chosen. Not an easy job, when the United States government has just finished dropping thousands of cluster bombs on Yugoslavia…" 'Je Ne Suis Pas Un Marxiste'
By Howard Zinn. Article. ZCommunications, June 1988; Failure to Quit, and excerpted from The Zinn Reader.
Howard Zinn writes: For a long time I thought that there were important and useful ideas in Marxist philosophy and political economy that should be protected from the self-righteous cries on the right that "Marxism is dead,” as well as from the arrogant assumptions of the commissars of various dictatorships that their monstrous regimes represented “Marxism.” 'Marx Is Not Dead'
Howard Zinn interviewed by M.H. Lagarde. La Habana. May 8, 2004.
"I'll remind people what Marx's criticism of capitalism was. I would demonstrate that these ideas have much to with the United States today. In other words, that Marxist criticism today is exact and current."

'The Human Reality of War Changed My Life'
Howard Zinn interviewed by Pedro de la Hoz. La Habana. May 7, 2004.
"Those who call themselves objective lie because they pick events and cover up their taking of sides. I do not hide to say: this is my point of view, it is not the only one, face it and make your own conclusions." 'The Problem Is Civil Obedience': Chapter 20 from Voices of a People's History
By Howard Zinn. Speech given in debate with philosopher Charles Frankel on civil disobedience in November 1970. Excerpt from Voices of a People’s History.
I was supposed to appear in court that day in connection with the charges resulting from the army base protest. I had a choice: show up in court and miss this opportunity to explain—and practice—my commitment to civil disobedience, or face the consequences of defying the court order by going to Baltimore. I chose to go.

'To Be Neutral, To Be Passive In A Situation Is To Collaborate With Whatever Is Going On'
Howard Zinn interviewed by Amy Goodman. Democracy Now! April 27, 2005.
Howard Zinn: I believe neutrality is impossible, because the world is already moving in certain directions. Wars are going on. Children are starving. And to be neutral, to pretend to neutrality, to not take a stand in a situation like that is to collaborate with whatever is going on, to allow it to happen. I did not want to be a collaborator with what was happening. I wanted my history to intercede and to take a stand on behalf of peace, on behalf of a racial equality or sexual equality..." 'You have to go beyond capitalism': Dave Zirin Interviews Howard Zinn
Howard Zinn interviewed by Dave Zirin. May 2, 2009.
Discussion ranges from the U.S. elections, the New Deal in the 1930s, the struggle for racial justice, equal marriage, and the need to recreate a socialist alternative. 1492-1992: The Legacy of Columbus
Talk by Howard Zinn. PM Press. 2011.
Howard Zinn returns to the themes he popularized in his masterful A People’s History of the United States—how we interpret history, and what that tells us about the struggles of the vast majority of folks typically written out of the narrative. A Big Government Bailout
Article by Howard Zinn. The Nation. October 27, 2008.
"It is sad to see both major parties agree to spend $700 billion of taxpayer money to bail out huge financial institutions that are notable for two characteristics: incompetence and greed." A Break-in for Peace
Article by Howard Zinn. The Progressive. July 2002.
"In the film Ocean's 11, eleven skillful crooks embark on an ingenious plan, meticulously worked out, to break into an impossibly secure vault and make off with more than $100 million in Las Vegas casino loot. Hardly a crime of passion.... No, money was the motive, with as little moral fervor attending the crime as went into the making of the movie, which had the same motive. I was reminded of this recently when I sat in a courtroom in Camden, New Jersey, and participated in the recollection of another break-in, carried out by the Camden 28, where the motive was to protest the war in Vietnam."

A Campaign Without Class
Article by Howard Zinn. ZCommunications, September 29, 2000 and The Progressive, November 2000.
"There came a rare amusing moment in this election campaign when George Bush (who has $220 million dollars for his campaign) accused Al Gore (who has only $170 million dollars) of appealing to 'class warfare'.… I noticed that neither of the accused responded with a defiant 'Yes, we have classes in this country.' Only Ralph Nader has dared to suggest that this country is divided among the rich, the poor, and the nervous in between. This kind of talk is unpardonably rude, and would be enough to bar him from the televised debates." A Chorus Against the War
Article by Howard Zinn. The Progressive. March 2003.
"Men who have no respect for human life or for freedom or justice have taken over this beautiful country of ours. It will be up to the American people to take it back." A Diplomatic Solution
Article by Howard Zinn. The Progressive. May 1999.
"A friend wrote to ask my opinion on Kosovo. He said many people were turning to him for answers, and he didn't know what to say, so he was turning to me (knowing, I guess, that I always have something to say, right or wrong). Several things seem clear to me, and they don't fit easily together in a way that points to a clean solution." A Few Words with Howard Zinn
Howard Zinn interviewed by Michael Pozo. St. John's University Humanities Review. March 2003.
MP: How is your approach to History conducive for positive social change?
HZ: I hope it gives people the History of previous social movements to show how they can bring about change, to show that it is possible, to give people faith that if they participate, if they do even small actions, that might have an effect, if not today, tomorrow or next year.

A Flash of the Possible
By Howard Zinn. Article. The Progressive. January 2000.
"What happened in Seattle recently was not as large an event as the general strike of 1919. But it showed how apparently powerless people—if they unite in large numbers—can stop the machinery of government and commerce. In an era when the power of government, and of multinational corporations, is overwhelming, it is instructive to get even a hint of how fragile that power is when confronted by organized, determined citizens." A Fourth of July Commentary
By Howard Zinn. Article. ZCommunications. July 4, 2000.
In this year 2000, I cannot comment more meaningfully on the Fourth of July than Frederick Douglass did when he was invited in 1852 to give an Independence Day address [on July 5]. He could not help thinking about the irony of the promise of the Declaration of Independence, of equality, life, liberty made by slaveowners, and how slavery was made legitimate in the writing of the Constitution after a victory for "freedom" over England. And his invitation to speak came just two years after the passage of the Fugitive Slave Act. . . . So it is fitting, at a time when police are exonerated in the killing of unarmed Black men, when the electric chair and the gas chamber are used most often against people of color, that we refrain from celebration and instead listen to Douglass' sobering words… 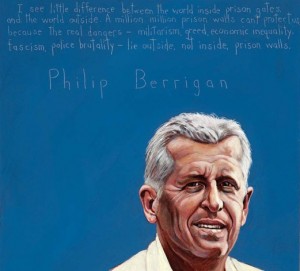 A Holy Outlaw
Article by Howard Zinn. The Progressive. February 2003.
"The long funeral procession for Phil Berrigan moved slowly through the streets of the poor Black parish in Baltimore where he had begun his priesthood. ...It was a bitterly cold December day in the kind of neighborhood where the city doesn't bother to clear the snow. People looked on silently from the windows of decaying buildings, and you could see the conditions that first provoked Phil's anger against the injustice of poverty in a nation of enormous wealth."
Pages