For Indigenous Peoples’ Day, we feature an excerpt from Chapter One of A People’s History of the United States. Howard Zinn describes why he tells the story of Columbus’s arrival “from the viewpoint of the Arawaks” and “the inevitable taking of sides which comes from selection and emphasis in history.” This is followed by additional resources for examining the impact of Columbus.

“Chapter 1: Columbus, The Indians, and Human Progress” begins with a journal entry by Bartolome de las Casas, a young priest, who participated in the conquest of Cuba.

Thus husbands and wives were together only once every eight or ten months and when they met they were so exhausted and depressed on both sides … they ceased to procreate. As for the newly born, they died early because their mothers, overworked and famished, had no milk to nurse them, and for this reason, while I was in Cuba, 7000 children died in three months. Some mothers even drowned their babies from sheer desperation….in this way, husbands died in the mines, wives died at work, and children died from lack of milk … and in a short time this land which was so great, so powerful and fertile … was depopulated…. My eyes have seen these acts so foreign to human nature, and now I tremble as I write….

When he arrived on Hispaniola in 1508, Las Casas says, “there were 60,000 people living on this island, including the Indians; so that from 1494 to 1508, over three million people had perished from war, slavery, and the mines. Who in future generations will believe this? I myself writing it as a knowledgeable eyewitness can hardly believe it….”

Thus began the history, five hundred years ago, of the European invasion of the Indian settlements in the Americas. That beginning, when you read Las Casas—even if his figures are exaggerations (were there 3 million Indians to begin with, as he says, or less than a million, as some historians have calculated, or 8 million as others now believe?)—is conquest, slavery, death. When we read the history books given to children in the United States, it all starts with heroic adventure—there is no bloodshed—and Columbus Day is a celebration.

Past the elementary and high schools, there are only occasional hints of something else. Samuel Eliot Morison, the Harvard historian, was the most distinguished writer on Columbus, the author of a multivolume biography, and was himself a sailor who retraced Columbus’s route across the Atlantic. In his popular book Christopher Columbus, Mariner, written in 1954, he tells about the enslavement and the killing: “The cruel policy initiated by Columbus and pursued by his successors resulted in complete genocide.”

That is on one page, buried halfway into the telling of a grand romance. In the book’s last paragraph, Morison sums up his view of Columbus:

He had his faults and his defects, but they were largely the defects of the qualities that made him great—his indomitable will, his superb faith in God and in his own mission as the Christ-bearer to lands beyond the seas, his stubborn persistence despite neglect, poverty and discouragement. But there was no flaw, no dark side to the most outstanding and essential of all his qualities—his seamanship.

One can lie outright about the past. Or one can omit facts which might lead to unacceptable conclusions. Morison does neither. He refuses to lie about Columbus. He does not omit the story of mass murder; indeed he describes it with the harshest word one can use: genocide.

But he does something else—he mentions the truth quickly and goes on to other things more important to him. Outright lying or quiet omission takes the risk of discovery which, when made, might arouse the reader to rebel against the writer. To state the facts, however, and then to bury them in a mass of other information is to say to the reader with a certain infectious calm: yes, mass murder took place, but it’s not that important—it should weigh very little in our final judgments; it should affect very little what we do in the world.

It is not that the historian can avoid emphasis of some facts and not of others. This is as natural to him as to the mapmaker, who, in order to produce a usable drawing for practical purposes, must first flatten and distort the shape of the earth, then choose out of the bewildering mass of geographic information those things needed for the purpose of this or that particular map.

My argument cannot be against selection, simplification, emphasis, which are inevitable for both cartographers and historians. But the mapmaker’s distortion is a technical necessity for a common purpose shared by all people who need maps. The historian’s distortion is more than technical, it is ideological; it is released into a world of contending interests, where any chosen emphasis supports (whether the historian means to or not) some kind of interest, whether economic or political or racial or national or sexual.

Furthermore, this ideological interest is not openly expressed in the way a mapmaker’s technical interest is obvious (“This is a Mercator projection for long-range navigation—for short-range, you’d better use a different projection”). No, it is presented as if all readers of history had a common interest which historians serve to the best of their ability. This is not intentional deception; the historian has been trained in a society in which education and knowledge are put forward as technical problems of excellence and not as tools for contending social classes, races, nations.

To emphasize the heroism of Columbus and his successors as navigators and discoverers, and to deemphasize their genocide, is not a technical necessity but an ideological choice. It serves—unwittingly—to justify what was done. My point is not that we must, in telling history, accuse, judge, condemn Columbus in absentia. It is too late for that; it would be a useless scholarly exercise in morality. But the easy acceptance of atrocities as a deplorable but necessary price to pay for progress (Hiroshima and Vietnam, to save Western civilization; Kronstadt and Hungary, to save socialism; nuclear proliferation, to save us all)—that is still with us. One reason these atrocities are still with us is that we have learned to bury them in a mass of other facts, as radioactive wastes are buried in containers in the earth. We have learned to give them exactly the same proportion of attention that teachers and writers often give them in the most respectable of classrooms and textbooks. This learned sense of moral proportion, coming from the apparent objectivity of the scholar, is accepted more easily than when it comes from politicians at press conferences. It is therefore more deadly.

The treatment of heroes (Columbus) and their victims (the Arawaks)—the quiet acceptance of conquest and murder in the name of progress—is only one aspect of a certain approach to history, in which the past is told from the point of view of governments, conquerors, diplomats, leaders. It is as if they, like Columbus, deserve universal acceptance, as if they—the Founding Fathers, Jackson, Lincoln, Wilson, Roosevelt, Kennedy, the leading members of Congress, the famous Justices of the Supreme Court—represent the nation as a whole. The pretense is that there really is such a thing as “the United States,” subject to occasional conflicts and quarrels, but fundamentally a community of people with common interests. It is as if there really is a “national interest” represented in the Constitution, in territorial expansion, in the laws passed by Congress, the decisions of the courts, the development of capitalism, the culture of education and the mass media.

“History is the memory of states,” wrote Henry Kissinger in his first book, A World Restored, in which he proceeded to tell the history of nineteenth-century Europe from the viewpoint of the leaders of Austria and England, ignoring the millions who suffered from those statesmen’s policies. From his standpoint, the “peace” that Europe had before the French Revolution was “restored” by the diplomacy of a few national leaders. But for factory workers in England, farmers in France, colored people in Asia and Africa, women and children everywhere except in the upper classes, it was a world of conquest, violence, hunger, exploitation—a world not restored but disintegrated.

My viewpoint, in telling the history of the United States, is different: that we must not accept the memory of states as our own. Nations are not communities and never have been. The history of any country, presented as the history of a family, conceals fierce conflicts of interest (sometimes exploding, most often repressed) between conquerors and conquered, masters and slaves, capitalists and workers, dominators and dominated in race and sex. And in such a world of conflict, a world of victims and executioners, it is the job of thinking people, as Albert Camus suggested, not to be on the side of the executioners. 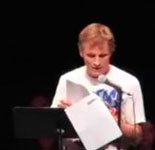 “The Devastation of the Indies: A Brief Account” (1542) in Spanish and English.
Watch online Voices of a People’s History Vimeo page.

Recorded in Madison, Wisconsin on October 9, 1991, Howard Zinn challenges the myths of the Columbus legend. The People vs. Columbus, et al.

Teaching activity role play in the form of a trial to determine who is responsible for the death of millions of Tainos on the island of Hispaniola in the late 15th century.

By Bill Bigelow
Once again this year many schools will pause to commemorate Christopher Columbus. Given everything we know about who Columbus was and what he launched in the Americas, this needs to stop.

Columbus initiated the trans-Atlantic slave trade, in early February 1494, first sending several dozen enslaved Taínos to Spain. Columbus described those he enslaved as “well made and of very good intelligence,” and recommended to King Ferdinand and Queen Isabella that taxing slave shipments could help pay for supplies needed in the Indies. A year later, Columbus intensified his efforts to enslave Indigenous people in the Caribbean. Even the Rain/También La Lluvia

Two filmmakers are determined to make a movie about the arrival of Columbus “on the cheap,” while the the Bolivian “Water Wars” are being waged. This film is dedicated to Howard Zinn. Read more at the Even the Rain website.