By Howard Zinn • The Progressive • February 3, 2003
The long funeral procession for Phil Berrigan moved slowly through the streets of the poor black parish in Baltimore where he had begun his priesthood. Some parents held young children by the hand, as they walked behind the flatbed truck that carried Phil's coffin, which had been made by his son, Jerry, and was decorated with flowers and peace symbols. It was a bitterly cold December day in the kind of neighborhood where the city doesn't bother to clear the snow. People looked on silently from the windows of decaying buildings, and you could see the conditions that first provoked Phil's anger against the injustice of poverty in a nation of enormous wealth.
END_OF_DOCUMENT_TOKEN_TO_BE_REPLACED

Interviewed by David Barsamian • ZCommunications • November 1, 2002
I want to know something about your roots, growing up in the projects on the lower east side.
I grew up in the slums of Brooklyn, a working class family. My parents were European immigrants, factory workers in New York. They met as factory workers. They were Jewish immigrants. My father came from Austria, my mother from Asiatic Russia, Siberia. I remember moving all the time. We were always one step ahead of the landlord. And changing schools all the time. My father struggled, went from job to job, he was unemployed and under WPA. I wanted to get out of the house all the time. Where we lived was never a nice place to be. So I was in the streets a lot. I understand what it's like for kids to live in and prefer the streets. That's how I grew up.
END_OF_DOCUMENT_TOKEN_TO_BE_REPLACED

By Howard Zinn • The Progressive • July 2, 2002
In the film Ocean's 11, eleven skillful crooks embark on an ingenious plan, meticulously worked out, to break into an impossibly secure vault and make off with more than $100 million in Las Vegas casino loot. Hardly a crime of passion, despite the faint electrical charge surrounding Julia Roberts and George Clooney. No, money was the motive, with as little moral fervor attending the crime as went into the making of the movie, which had the same motive. I was reminded of this recently when I sat in a courtroom in Camden, New Jersey, and participated in the recollection of another break-in, carried out by the Camden 28, where the motive was to protest the war in Vietnam.
END_OF_DOCUMENT_TOKEN_TO_BE_REPLACED 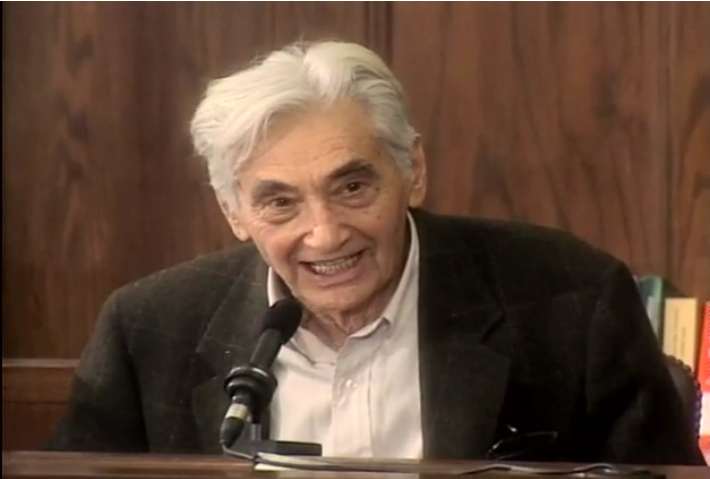 By Howard Zinn • The Progressive • July 2, 1999
Official terrorism, whether used abroad or at home, by jet bombers or by the police, always receives an opportunity to explain itself in the press, as ordinary terrorism does not.
END_OF_DOCUMENT_TOKEN_TO_BE_REPLACED